New surfski releases are always met with some interest, mainly discerning which category of stability it falls into and whether there’s any interesting new outfitting to take note of.  Personal demos will then help establish whether the fit is right and how the boat goes for the individual paddler.  Generally, surfskis are such simple boats that many of the differences between the brands and models are subtle, and somewhat hard to distinguish just by looking at them.

Nelo surfskis have been one of the exceptions, offering boats that are noticeably different even through casual observation.
The primary reason for this: they’re a lot smaller.  Many brands have 5.6 meter/18-foot surfskis, however, their shorter skis are also quite wide (up to .55m/22”) and aimed at entry-level paddlers looking for more stability.  Their elite skis still tend to be roughly 6.4 meters/21 feet, with some trending a little shorter these days.  The Nelo 560 is an elite-level ski that measures 5.6 meters (18.4 feet) x 0.45m (17.7”).

The shorter length, lower volume Nelo’s offer a pretty unique style of boat in the current surfski market.  Oscar Chaluspky is CEO of Nelo Surfskis, 12 x Molokai Champion and the world’s most recognizable and accomplished surfski coach.  Below he answers a few questions about why Nelo produces shorter surfskis, and his impression paddling them around the globe.

Interview by Chris Laughlin April 2022 – Thanks to Chris L. for sharing this with us.

There’s been some chatter since Nelo’s shorter surfskis arrived on the scene that the shorter length was not as much about performance as it was about the logistical benefits that come with a shorter boat: smaller shipping container, easier car-topping, easier garage storage.  Was Nelo’s design focus driven by these logistical concerns, or was performance on the water the primary focus, with the shorter boats providing secondary logistical benefits?  Or a blend of the two concepts?

Oscar:  Logistical concerns are most definitely not the reason we designed Nelo surfskis to be shorter in length compared to the industry standard.  Easier storage and transport of the shorter boats are certainly benefits, however performance on the water is always our primary focus.  The concept of a shorter surfski is not entirely new, many racing skis going back to the 1980’s were shorter.  Remember, I won seven Molokai’s on my Chalupski Surfski, which was a low volume 5.6 meter ski.  I did my first Molokai in 1983 on this boat in a time of 3 hours 23 seconds, and the race was 1.5km longer.  Also, on flat water, the fastest kayak is a K1 at 5.2 meters.

What has been your personal impression since making the transition from longer skis to shorter skis?  You’ve been on the shorter boats for a few years now, did you notice immediate differences, and what are your long-term takeaways?

Oscar:  Since I had prior experience with shorter skis I knew what to expect when I arrived at Nelo.  They already had a 5.6 meter ski, and they asked if I was happy to continue with that premise.  I said 100% yes.  My impressions on the shorter skis are that they have a lot of benefits.  Easier and more quickly to accelerate, and I find them to be more agile, they turn so well!  These qualities combine for some great downwind performance, quick to catch waves and efficient to maneuver and link runs.  I took my 560 for an 80km downwind run off the Portugal coast and finished in 4 hours 37 minutes; an average speed of 17.7km and heart rate of 123bpm.  Very efficient.

If you feel there are performance advantages in a shorter surfski, where do they come from?  Is it due to less wetted surface area?  Less volume and windage?  More maneuverability?

Oscar:  I’d say 100% yes to all of those points.  As I mentioned the Nelo skis accelerate extremely well and their length also makes them quicker to turn, a great combination.  The lower volume makes them much less susceptible to being pushed around by the wind.  I honestly believe there is no advantage to a longer surfski; if I thought a longer ski was better I could make one tomorrow.  I won’t be.

So you find the shorter skis to be quick and nimble in downwind paddling.  Is there a potential disadvantage in that the bow on a shorter ski may bury more easily due to less overall volume up front?

Oscar:  I don’t believe that is the case.  If the bow of the surfski is getting buried while paddling downwind, I attribute that to poor downwind skills.  A major part of downwind paddling is learning how to control and maneuver your boat well in the waves, keeping it in the proper position to maintain speed and momentum by preventing it from plowing into the wave in front of you.  As I mentioned, I find the shorter ski more efficient in this regard.  Nelo does provide a wave deflector that can be mounted on the forward deck to help shed any excess water coming over the bow.

How do these advantages and/or disadvantages become more noticeable in calmer conditions versus rough water?  One common theory is that the shorter Nelo skis perform well in smaller, close together wave conditions that are found in more protected waters and seas without big rolling ground swell.  Do big seas and surfing runs present more of a challenge for the shorter boat?

Oscar:  First I will say yes, the shorter skis fit better in the smaller, close together wave conditions.  No doubt about that.  But that does not translate into poor big water performance.  Many of my runs off of Portugal, including my 80km paddle mentioned earlier, take place in 20-30 foot swell and I have encountered no problems at all.  Portugal actually has some of the biggest swell that I have paddled in.  My biggest day out was at Nazera, where it was close to 100 feet!  A funny thing is that Cory Hill to date has not yet gone under 3 minutes for a km, I did it at the 70km mark of my 80km paddle in my 560.  In fact I did it 3 or 4 times!

How does paddler size and weight effect comfort and performance in a shorter ski, if at all?

Oscar:  Honestly, I think this is more about the paddlers skills than it is about the weight and size of the paddler.  I’ve never been considered a small guy, however I have no issues paddling a low volume surfski because I have the proper skills.  If you have poor skills, whether it be technique, balance or reading the water and wave conditions, you will struggle on any surfski whatever your height and weight

Skill and experience level is another interesting point.  Common perception is that longer boats are faster boats.  But getting back to wetted surface area, perhaps new paddlers, smaller paddlers or less fit paddlers can not drive the longer hulls to full potential?  Does the shorter hull help more paddlers get the most out of the boat?  What about elite paddlers, since they can get the longer skis up to speed more easily, are they sacrificing anything by using a shorter ski?

Oscar:  I essentially look at it like this: smaller and/or less fit paddlers will see the most direct advantage in ability to move a shorter ski faster; bigger, faster and elite paddlers will make both the short and long boat go fast.  This is looking at it in terms of driving the hull forward on flat water, new benefits of the shorter boat are introduced for all levels when heading into wind and waves as mentioned earlier.  Remember on flat water, as I said, a K1 is still the fastest boat around.  Big guys like Dorstal, who is 6ft 6in and weighs about 120kg, have won many 1000m world titles paddling K1.

So have there been any racing or training situations that you thought the shorter ski might be at a disadvantage, where you wondered if a longer ski might have been an advantage?

Oscar:  Nope.  I really have never felt I was at a disadvantage in my shorter ski, in fact I only see advantages.  Another nice benefit of our shorter surfski design is that we have been able to make some 7.5kg surfski’s.  Building such lightweight and strong skis is actually that much easier to accomplish with a shorter ski, and we all like that!

Does Nelo do any controlled testing and/or computer modeling to measure the performance benefits of their shorter surfskis?

Oscar: I can say that Nelo and I spend many, many months testing each boat design before they head to full production and come to the market!  It’s really an incredible team at Nelo. 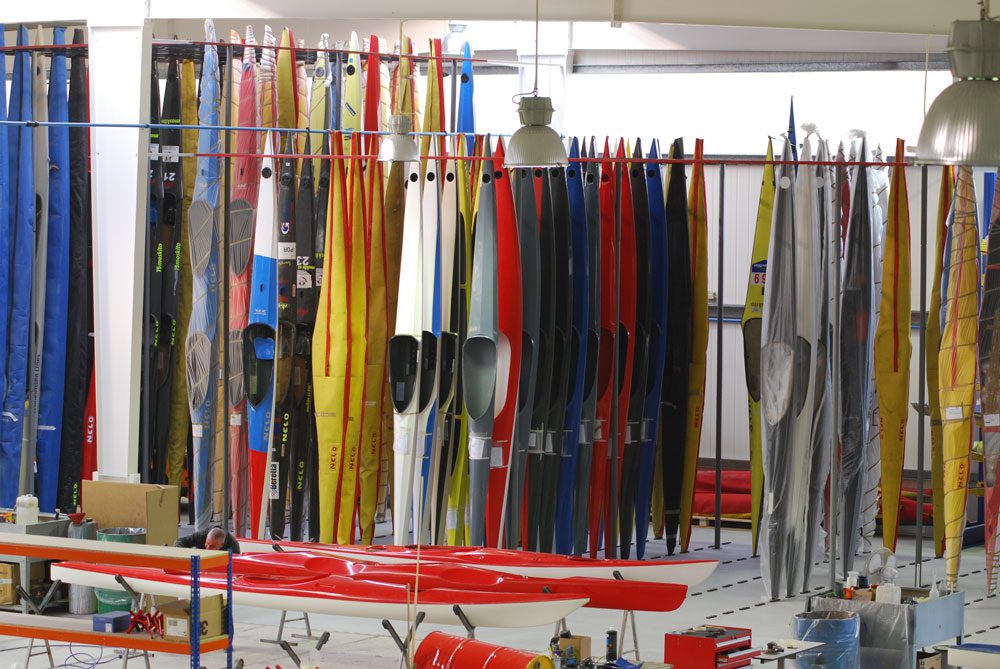 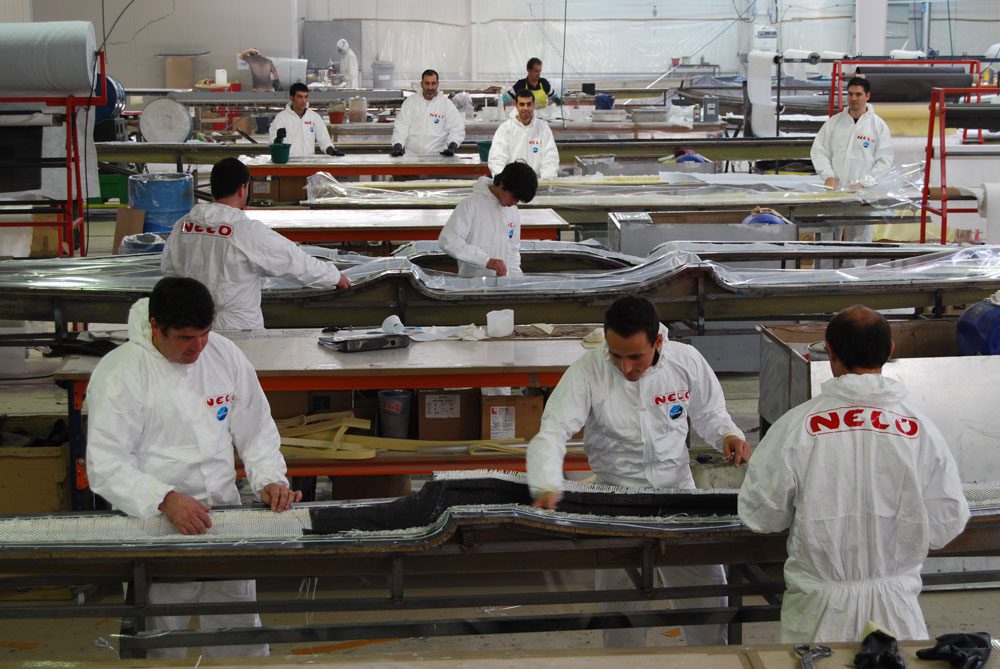 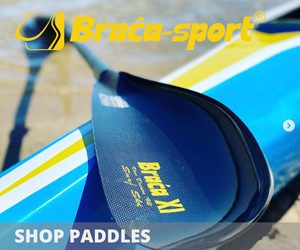